After an extended holiday weekend, the US and UK markets are back online and contributing to liquidity. While there remains a structural drag on intentions influenced by a market far exceeding its fundamental moorings, there has been a noticeable jump in volatility for some assets following critical themes (e.g. inflation) or are currently bombarded by the market. risk of scheduled events (eg the Dollar). One notable slide during the last session that brought uncertainty back into the chart for Wednesday was the slide in US markets which began almost immediately after a strong opening gap. The S&P 500 posted an eighth consecutive bullish spread at the opening to end the day with a slight loss from Friday’s close. This has left us with a decelerating rally since the abrupt reversal of May 19th… and just a little before we regain the record set a month ago.

General risk trends remain disjointed; and pushing records against a backdrop of lagging fundamental support, conviction is increasingly important. I maintain that the dominant trends of the year and past years are bullish for speculative measures like US indices, but the greatest “potential” (in other words the most aggressive move) would be a slide towards aversion. outright for the risk. At the moment, there is no clear underlying current to follow across the market, but there are still some strengths for performance. The Nasdaq 100 to Dow ratio highlighting the preference of tech stocks – the flagship theme over the past five years – slipped further in the last session. The cryptocurrency market appears to have lost much of the luster of the first three months of the year, with Bitcoin making a wedge after breaking head and shoulders last month. Stocks even appear to be the trump card of the day with ETF BUZZ rising but below the peaks of March and April as AMC has picked up the torch. The action doesn’t seem to change much until you realize the doji came after a remarkable 22% spread to the upside – and the market continued to rally over 20 more after the close. 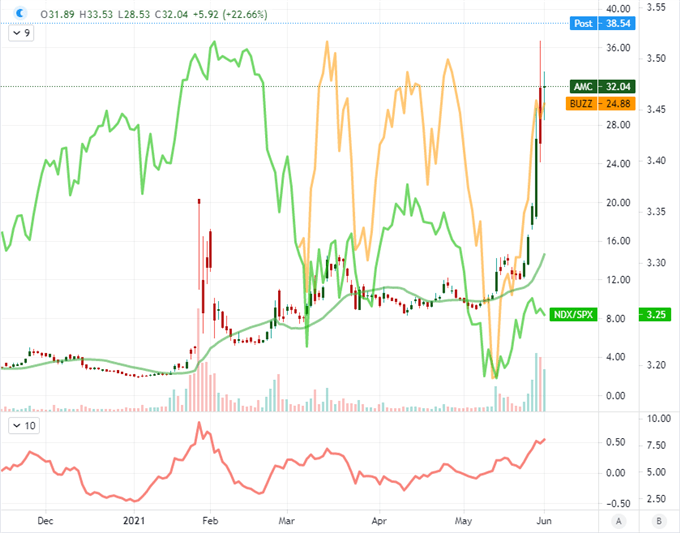 Inflation and interest rate speculation return to the frontal lobe

For major market themes, inflation looks set to wipe out fundamental radars again this week. Interest in Google search around “inflation” declined slightly from the previous month, but search around “taper” in the United States continues to grow. Recall that the end of last week saw the publication of the Fed’s preferred inflation measure (the PCE deflator) which reached its highest level since 1992. Adding to this notion, the ISM manufacturing report offered better read for May, but beyond the headlines were reports of commodity and labor shortages fueling inflation fears. The American Chamber of Commerce has warned that it views Americans’ unsuitability for open jobs as a critical risk to the business sector. Add to that the frequent remarks by James Bullard, the leader of the Fed mob, that labor markets are probably tighter than they appear and Friday NFPs are gaining even more weight. Only this time, I the component of the average hourly wage may be just as large – if not more – than the net change in the wage bill. 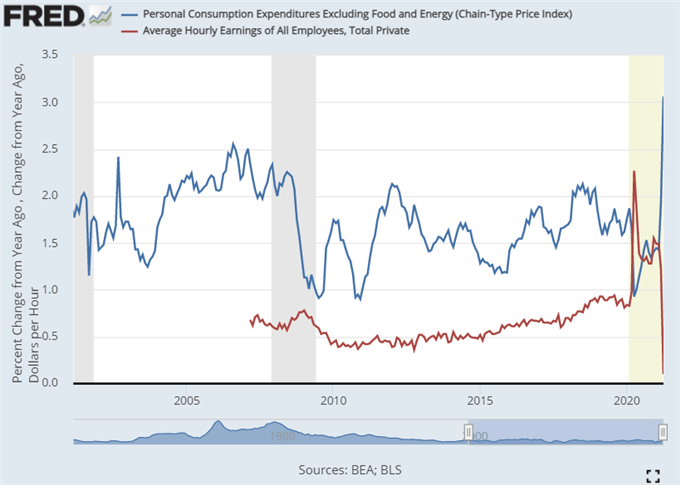 The potential for the Fed to be forced into a faster monetary policy normalization timeline than the market as a whole is comfortable with does not appear to have given the greenback much benefit so far. . The DXY Dollar Index slipped through Monday but rebounded in the last session. That doesn’t seem like so much of a fundamental response to manufacturing data or renewed rate speculation as a simple lack of momentum to make a serious offer to erase the low of the range of the past two weeks, which would put a Critical multi-year trend line under Fire. Pushing EURUSD above 1.2350 or GBPUSD above 1.4300 would be a serious escalation. A definitive view of the Fed’s intentions or a global race for risk trends can tip the scales; but other than that, the currency can wait for high tide. 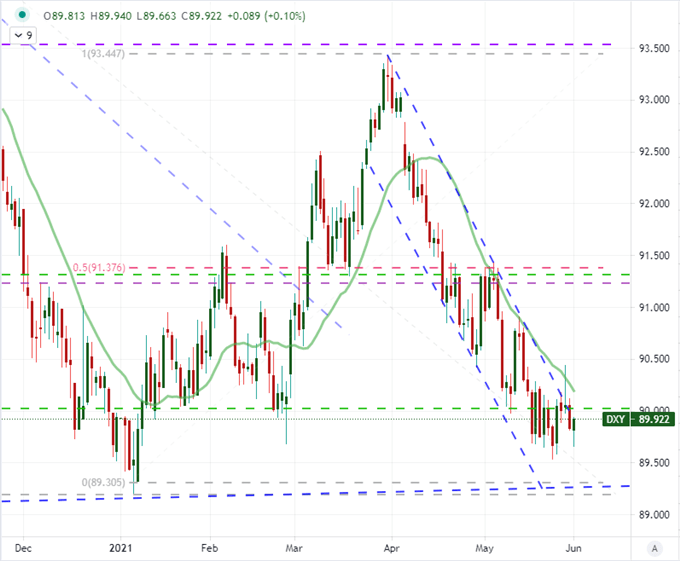 Among the dollar-based crosses that are gaining more interest, the economics case can be a good addition to simple graph-based models that struggle to gain traction on their own. EURUSD was interesting for stronger Eurozone inflation figures and falling unemployment, but that didn’t clarify much. AUDUSD is clearly one of the more struggling pairs with the RBA rate decision on Tuesday morning and Australia’s first quarter GDP update this morning (stronger at 1.1% annual growth vs. 0.6% expected), but the currency does not capitalize against the dollar. or other crosses. Top of my watchlist for potential remains USDCAD. Another provisional dip below 1.2035 likely pissed off many retail buyers looking to soften the decline, but the data (Canadian GDP and manufacturing) seemed to give a fundamental transmission of inertia. This remains a pair to watch as a breakout is inevitable – but conviction in the call is not. 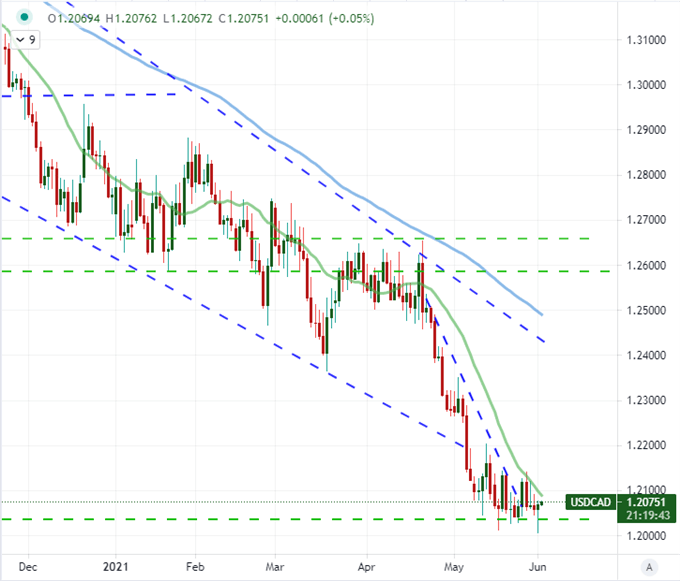 While the majors themselves are of great interest, it looks like volatility and technical advancements in the emerging market (EM) world of currencies could present a single bright spot for activity. There is a lot of emerging data on tap for this week that could take this segment a little further out of the realm of inert risk trends. With Fed speculation still in the lead, traders should remain vigilant, but no noticeable breakouts are missing like the USDBRL (US dollar – Brazilian real) breakout below 5.2000 which has been trailing support over the past few years. Last 15 months. A full breakout, however, would come below 5.0000; but I find it unlikely that a total disruption will occur here if other markets continue to struggle. 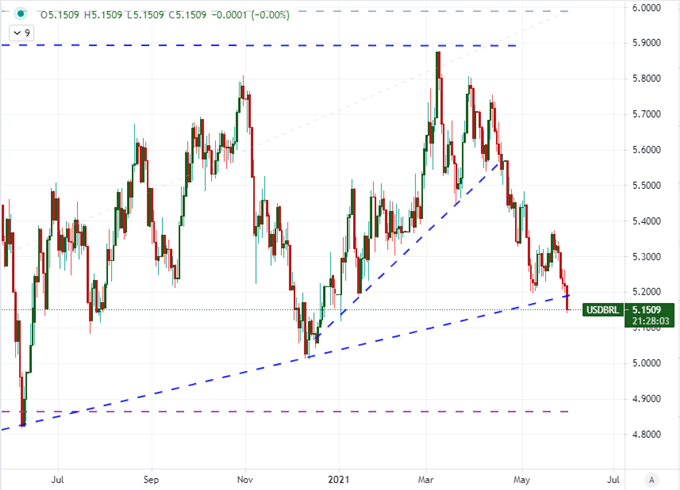 An emerging market cross breakout that does not trade in wider ranges is coming from the USDTRY. The Turkish lira came under pressure again in March when President Erdogan sacked the central bank governor and then the deputy director. His replacement seemed to have a lot of beliefs about high interest rates as president, but two official monetary policy decisions have come and gone without intervention from the monetary policy authority. This honeymoon appears to be over, however, with reports that Erdogan told central bank chief that interest rates should be lowered. The next meeting is scheduled for June 17the. 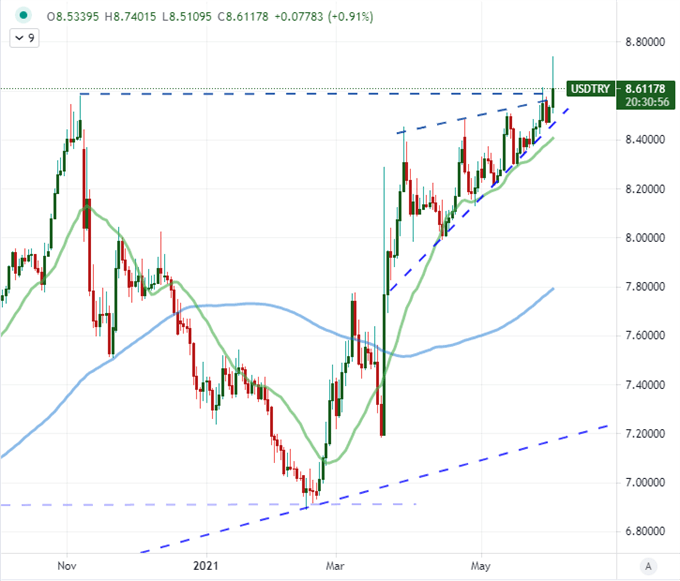 element. This is probably not what you wanted to do! N n Load your application’s JavaScript bundle into the element instead.